In my last blog post I described how I implemented the lock manager in LIFTI. This was pretty straightforward because ReaderWriterLockSlim was leveraged to do all of the really heavy lifting, but the hard part came when I wanted to unit test the code.

This post will take you through the thought and implementation process I went through to make this happen.

The four key scenarios I wanted to test were:

Looking at these tests, a few things become apparent:

I’ve chosen to call a thread that executes actions an actor - this helps to differentiate between them and the main test thread. For each step in a sequence only one actor will have a role to play; the others will simply wait for the next step to come around. 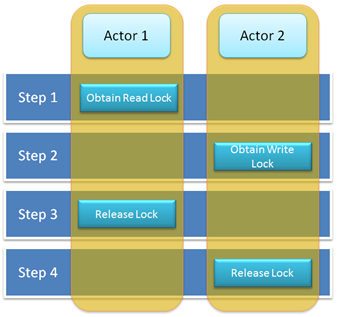 When this sequence is executed, locks should be obtained and released in the following order: 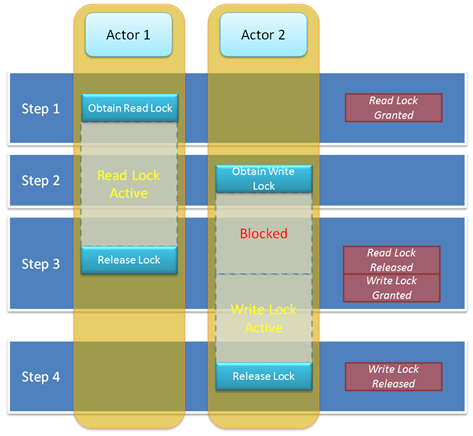 Due to the fact that the write lock blocks due to an active read lock, the resulting lock order is:

Anatomy of a test case

Each unit test is going to have to perform the following high-level steps:

Obviously the hard part is going to be step 3 of the above. In order to help with this, I created a helper class called ThreadTestContainer to encapsulate this logic, the public interface to this being:

The constructor code is:

In this code we:

Hooking into the events in this way allows us to see the actual order the events took place as opposed to the order of the steps, as the events are not raised until the locks are actually acquired, even if they were blocked prior to being granted.

The work actually begins in the ExecuteTests method, but before we go into that, I need to explain how we’re going to get each of the threads (including the main test thread) to co-ordinate.

You shall not pass! (at least until all threads are ready)

I decided to make sure that all the threads met up at:

Because the number of threads involved in this synchronization is only known at runtime, I decided to make use of the Barrier class, introduced in .NET 4.0. In a nutshell this allows multiple threads to block at a line of code until a specified number of threads have done so.

The process loop that the threads will go through is best described in a diagram: 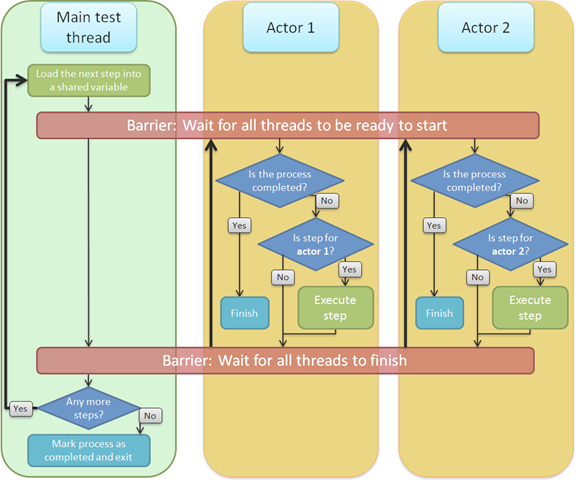 At the moment we’re making the assumption that all threads are always going to make it to the barriers, but that isn’t going to be the case. As previously mentioned, obtaining a lock at a step may block if there are other locks pending. This means that we have to be a bit smart about how many threads to wait on at the barriers for each step.

I took the decision that it’s best to leave that knowledge up to the person who defines the test, as they would be best placed to know what is expected to happen at each step.

We can use a small struct to describe a step in a sequence: 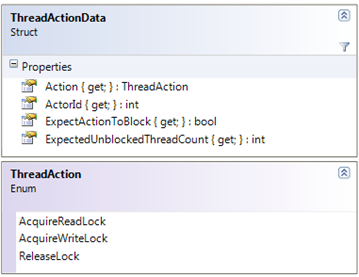 Lets get into the main part of the code now. ExecutesTests is the part that starts up the threads - I’ll walk through it in chunks:

Note that at both barriers we provide a timeout to the SignalAndWait method - this means that if the test has been configured incorrectly and not enough threads signal we can raise an exception, ending the test.

That’s it for the ExecuteTests method - let’s break down the code for the threads.

This is fairly simple - there’s the wait call at the start and end of the loop, which repeats until the main thread sets the completed flag. The implementation of ExecuteThreadAction is even simpler, so I won’t include it here for brevity (it’s essentially just a switch statement).

One thing I haven’t covered here is handling exceptions within threads. If an exception is raised on a different thread during a unit test it can really mess with the results - you get a warning from the test, rather than an error. To top things off, you don’t get the exception details associated with the test itself.

The trick I used here is to catch the exception in the ThreadExecute method and store it in a variable. When the main thread detects that the variable is non null, it re-raises the exception on the correct thread. I haven’t included this in the previous code to avoid cluttering it up, but' it’s pretty straightforward.

Going back to test case 3 (write locks should be blocked until any outstanding read locks are released) and using all the previously described helper classes, we can implement the unit test like this:

It turns out that writing an article about threading is almost, but not quite, as writing threaded code. I hope that I’ve managed to convey something on interest to you and you can take something away.

There is a potential to move some of this into a multi-threaded unit test framework of some sort, though unless I encounter a similar problem in future I’ll leave that as homework for someone else!

The full code can be found on the CodePlex site. The specific file is LockManagerTests.cs file in the unit tests project.