Debugging "The agent process was stopped while the test was running"

I’ve encountered the unhelpful “The agent process was stopped while the test was running” MSTest error result a couple of times recently, and I thought that I’d share a few of my findings and approaches to debugging the unit tests that cause them.

In my experience, the Error result usually manifests itself for one of a two reasons:

The first of these is easy to overcome, as I’ll show later, however the second can, under some circumstances, be much trickier to diagnose.

The error results are usually presented in the Test Results window like this:

Side note: you can see that I’ve grouped the tests by their result - this is my preferred approach to viewing my unit tests in this window.

When the test results contain an error, you can get more details by clicking on the “Test run error” hyperlink. This shows you the error details for each of the tests that ended up with the Error result, and may well provide you with enough information to solve your problem:

Here you can see that an error on the background thread caused the test to fail. If you’re lucky, this window should given you enough information to fix your problem.

Something that’s important to consider is that if your code makes use of background threads that live on beyond the lifetime of the test, an exception raised on this thread can cause the error to be reported against a subsequent test!

When executed in order, you’ll see this in the test results:

Uh, oh. The test that did nothing wrong was blamed for the failure of the bad one. Looking at the Test run error report will help a little in this case - the call stack looks like this:

If you look carefully, you might see some indication of the test that the exception originated from.

No call stack in the results window

You can’t always infer the test at the root of the problem from this call stack. Indeed, there are times when you don’t get any stack trace information - like this:

When this happens, I’ve found that it’s usually because the exception that is being thrown from the other thread is a custom exception and the test framework is unable to de-serialize it into the test AppDomain. If you dig around in the debug output you might find exception details that indicate this:

If you still haven’t got to the bottom of your test Error, then you can always debug the tests. Before you start debugging, make sure that you’re catching all exceptions from the Debug/Exceptions menu (or Ctrl-Alt-E): 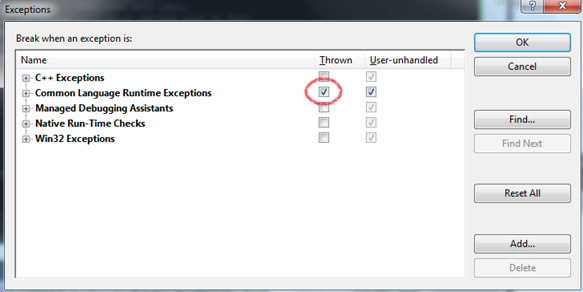 Hopefully these tips will help you identify the cause of your unit test errors - good luck!